The People Behind David Austin Roses

Discover the people behind the family-owned and run business.

As a family-owned and run business, embracing its third generation, we are hugely fortunate to work with the talented people who make up our extended family.

For what is now a globally recognised brand, David Austin’s beginnings were humble and befitting of the modest and passionate gardeners and farmers who built it. Centred around the clear vision of the late Mr Austin, or Mr A, as he was affectionately known, and supported by his wife Pat and a small close-knit team, David Austin Roses bloomed onto the horticultural scene, breaking new ground, learning as they went and overcoming barriers along the way.

Early on, things were a touch experimental as the newly appointed David Austin team navigated the challenges of running a horticultural mail order business from a kitchen table with just six people. By the 80s, there were two dozen people on board, as demand and expectations expanded. Carl Bennett, who joined back in 1989 when he was just 18 years old, was one of those lucky people. Originally there to assist with general duties, he is now a rose breeder, having learnt his craft from over 30 years of working side by side with Mr Austin.

The speed of progress increased as the team grew and with it the aspirations of Mr Austin. Gardeners were needed to tend to the freshly installed public rose gardens and waiting staff required to serve the customers in the newly constructed restaurant. The successful introduction of potted roses further fuelled the need to add more people to the ever-growing bunch of personalities tasked with making these initiatives a reality.

Recruitment was often informal, almost accidental, with roles advertised in the local Post Office or offered by word of mouth. Interviews quite frequently featured a dog, a quick chat with Mrs Austin and could even mean a same day start! Mr Austin had an eye for a person’s character and their motivation to succeed. He wasn’t fazed by inexperience, believing skills could be taught and expertise nurtured. He built a team of creative problem solvers who shared his pioneering spirit and could overcome obstacles with positivity, ingenuity, and resourcefulness. 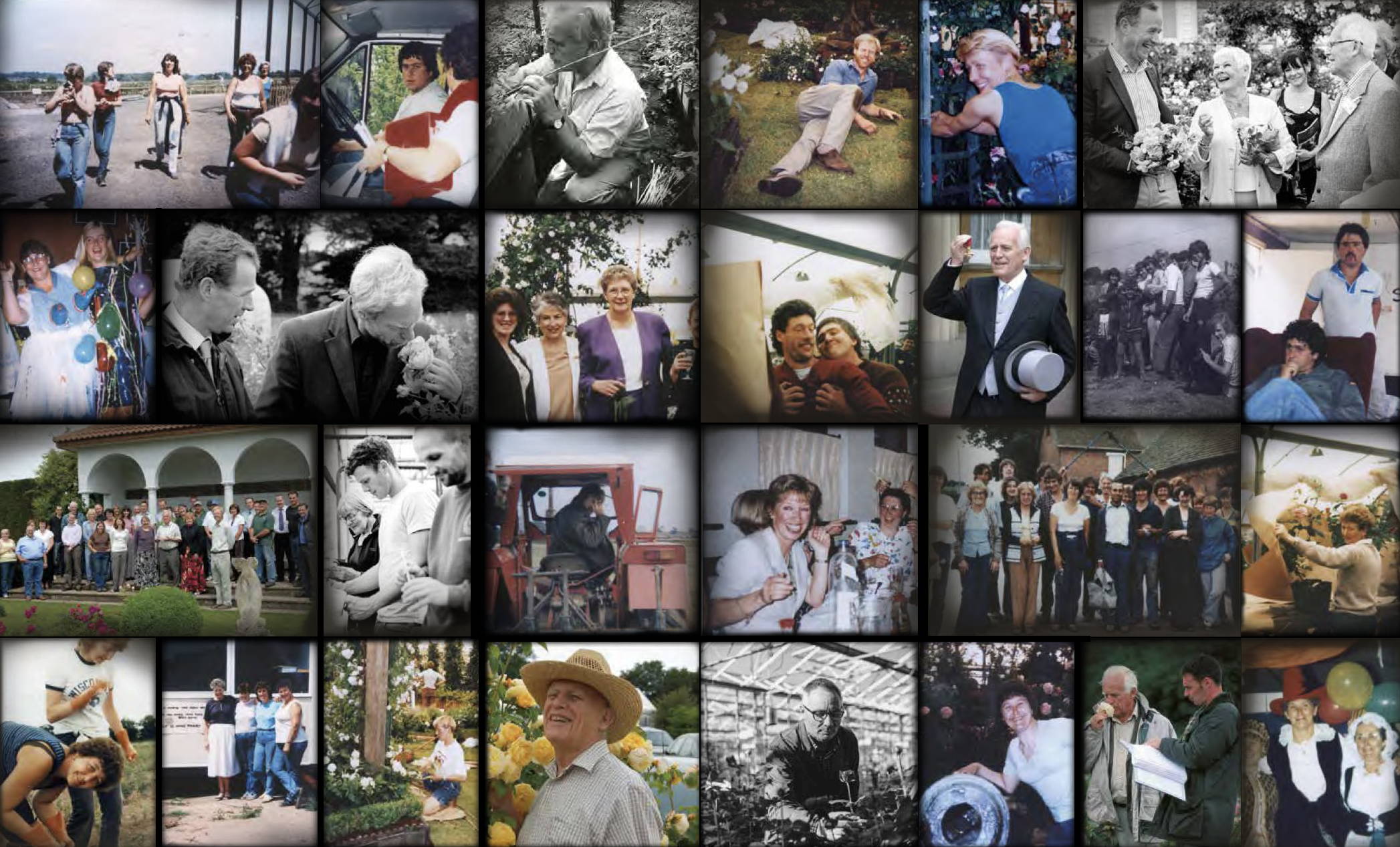 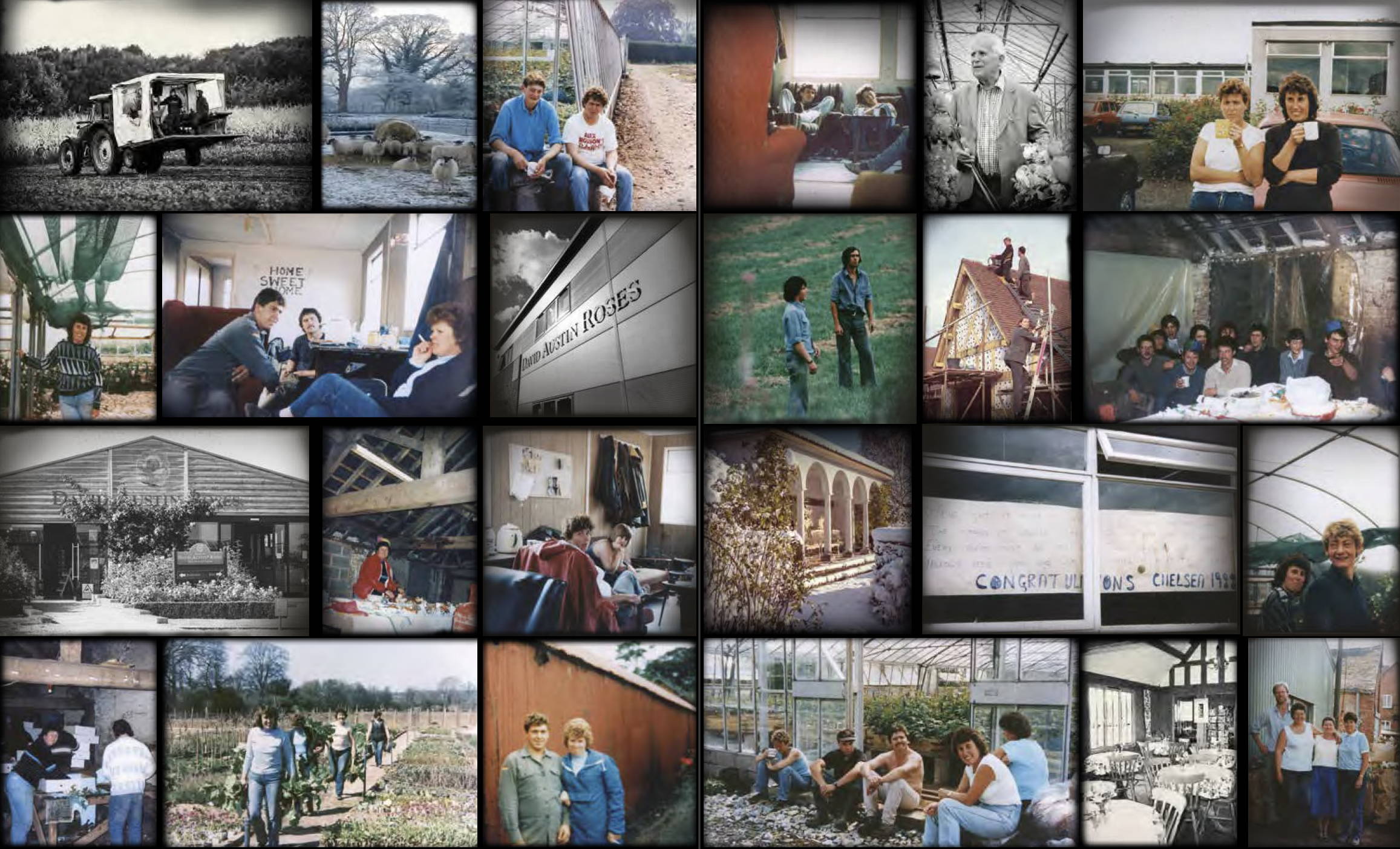 Our people are the cornerstone of David Austin Roses; without them, there would be no plants.

In 1994, Mr Austin was joined by his son, David Austin Jnr, who having been surrounded by roses his whole life, as well as being a successful businessman in his own right, brought a fresh outlook. This led to the creation of the marketing department, more investment into new technologies and international expansion. The 90s proved to be an incredibly exciting time as English Roses began to take-off around the world and the little team in Shropshire visited the USA, Japan and Europe.

Growth exploded in every way; new varieties, rose orders, recruitment, infrastructure - there was no looking back. The commitment of the relatively inexperienced, good-hearted, loyal bunch of employees forged the business into what it is today. Many of these people who joined as youngsters, often on horticultural apprentice schemes, are still with us 30 years on and continue to work with the same determination and drive they had at the very beginning.

Learning as they went, direct from Mr Austin and the early stalwarts, knowledge and expertise was handed down person to person, building a camaraderie, team spirit and a common goal.

Never was this more evident than during flower show season, with everyone pulling together to introduce new varieties and bring home a gold medal.

Perhaps it is the nature of growing plants, the uncontrollability of the seasons and the hard graft required in all weather conditions that pulls people together, forges friendships and builds the trust needed to withstand the challenges of a rapidly expanding company in an evolving world.

There is no denying that part of the success of David Austin is due to the personalities who work here, the way we embrace the eccentricities, hard work, fun and spirit of people who genuinely love what they do. There is no time of year when this is more evident than the legendary Christmas parties, known for their relaxed atmosphere, probably helped by Beryl’s famous alcoholic trifle.

Browse through the memories of David Austin Roses employees

First exhibiting at RHS Chelsea Flower Show in 1982, flower shows have always been a regular pilgrimage requiring a monumental effort from everyone involved, rewarded with 25 gold medals to date. The early Chelsea Flower Shows feature in the memories of many as halcyon days – a real family affair, where everyone rolled up their sleeves and got stuck in. From diligently working with Mr Austin on the show varieties in the Chelsea House at Albrighton, to heading down to London at a moment’s notice to set-up and man the exhibition stand, not realising there may be a need to stay longer and finding yourself with no spare clothes or indeed, a bed to sleep in!

The anticipation of the Chelsea medal result was always a tense but exciting time. The whole team back at the gardens would be on tenterhooks waiting for the announcements, armed with homemade banners and congratulatory poetry, ready for Mr Austin and the show team’s return.

Established early on, the ‘Golden Girls’ - Val, Jan, Beryl, Norma, Iris, Ann and Elaine (not pictured) - were an eclectic bunch and integral to the fabric of the company; they’d been there, done that and smelt all of the roses! They were hugely knowledgeable and so much fun.

GROWING UP WITH ROSES

Growing up at David Austin Roses, our Nursery Manager, Chris Lowe, joined over 30 years ago as part of the Youth Training Scheme. “No two days are the same. I have been nurtured and given the most amazing opportunities to travel, learn and work with some wonderful people.” Known for his infamous Christmas party skits and impressively large hair, Chris was once offered 5 by the quietly good-humoured Mr Austin himself to ‘get yourself a haircut if you’re going to be at Chelsea!’ Eager to please, Chris obliged and has attended many Chelsea Flower Shows since, minus the large hair.

It’s not just local talent that we’ve been lucky enough to recruit. Our Eastern European employees come from all walks of life, and a number from Lithuania, who joined us on the SAWS (Seasonal Agricultural Workers Scheme) around 20 years ago are still with us today. Sharing our passion, now living locally with their own families, they have also grown up at David Austin Roses, making Shropshire their home.

Internally notorious, the David Austin Roses Christmas parties were first held in a freezing cold barn with haybales for seating, Mr Austin carving the turkey, followed by Beryl’s renowned ‘boozy trifle’ and Mrs Austin handing out presents to staff from a wheelbarrow. It was a bit like spending Christmas with your own family. Over time, as numbers grew and people settled in, there would be sketches, skits and performances – including, to name a few – renditions of Abba, Oasis and the Spice Girls. Our current staff still remember to this day the simplicity and easy going, caring nature of the people at the heart of our business and celebrating with them was always an absolute joy.

Beryl Brown was one of David Austin’s earliest employees, remaining part of the family for over 30 years. Below is a wonderful account of her time with the company which as she says in her own words, “well, I never really left, did I?”

The Story Behind the Plants

The ‘English Rose’ – the term given to a rose bred by David Austin – was born from a simple desire to create a more beautiful rose.

The sheer scale of change that has taken place over the last 60 years has been extraordinary.

The Story Behind the Place

Hidden in the Shropshire countryside it is the epitome of Englishness, a little haven of busy gardeners, growers, people and more.

Are you in the right place?

Or select a different store to visit